You are here: Home / Library / The Four Suitors 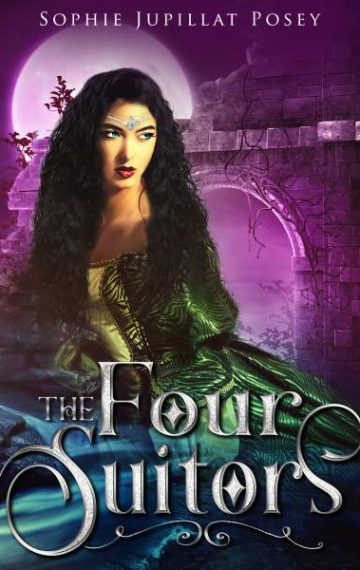 Quick-witted and confident, Princess Laetitia of Avaritia always gets what she wants—until her 17th nameday ball. The King and Queen, believing marriage will rein in their daughter’s rebellious nature, surprise the Princess with not one, but four suitors: a philosopher, an astronomer, an artist and a necromancer.

If Laetitia can’t learn at least one suitor’s craft and prove herself to be a worthy wife, she will lose her crown—the one thing she cares about most. Laetitia irks her suitors as much as she can while learning as little as possible about them—and their so-called “crafts.”

But when she and Sir Blaxton resurrect one of the many peasants who have died recently from an unprecedented disease, the corpse’s cryptic words about his death set them on a race to find answers: What is the disease? How is it spreading so quickly? And why is it affecting only the peasants?
As Laetitia tries to find answers, she uncovers a web of corruption with a stranglehold on her kingdom. Like it or not, she’s going to need the help of all four of her suitors—even if they end up putting their own lives on the line.