You are here: Home / Library / Thou Shalt Not Dream 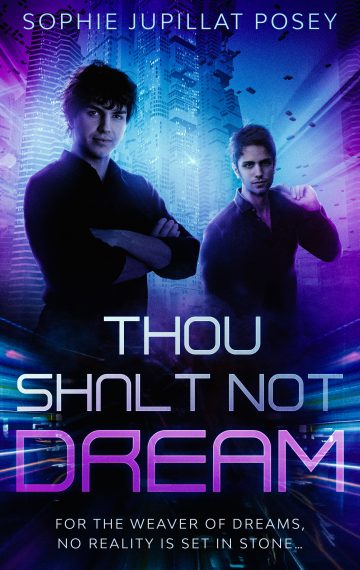 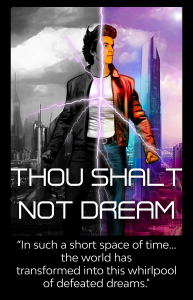 For the weaver of dreams, no reality is set in stone…

In the year 2046, the dictatorial Unit rules. The United States has become an isolationist nation broken in multiple city-states, where technology and punitive commandments are ubiquitous. Citizens are ranked according to power and financial leverage. Only Class I inhabitants are allowed to choose elite professions. In a society where productivity trumps all, creativity and self-expression–including dreams–have been outlawed.

Sixteen-year-old Colin Reveil, powerless to stop the dreams he’s had since he was four, lives in fear of being discovered. His friend, Tyler, son of one the world’s most prestigious bankers, believes both creativity and technology should be accessible to all. He alone knows about Colin’s closet dreaming. But, as their friendship wavers, how long will Tyler remain loyal?

Seeking an imprisonment facility where caught dreamers are being held, Colin instead stumbles upon a shop trading in nightmares and dreams, bought from closet dreamers and sold to rebels who inject themselves with the intense fantasies. Colin’s intention to sell his gets lost when he realizes he can modify his dreams, changing reality.

If the Unit finds out about Colin’s dreaming, he faces imprisonment and reformation. And if they find out about his power… But who can he trust in a world where the affluent flourish and the rest are rats in their maze? What mortal would dare to dream a dream?